Choosing the right institute is the first step to win before the battle actually starts.

An attentive review of the following will give you an idea of  how Network Bulls is the best institute for CCIE Training in India, how it became world famous in just 8 years of its foundation, and how come it has been winning back to back awards from the last 8 years.

Labs of Network Bulls are World’s Biggest Cisco/CCIE Training Labs. Unlike many institutes which focus primarily on CCIE students/aspirants and their practice, Network Bulls doesn’t follow the same approach i.e. we have separate Labs for CCNA, CCNA Security, CCNA Voice, CCNP R&S, CCNP Security and CCNP Voice. This helps our students to practice thoroughly from starting which allows them to have a strong base and understanding of the fundamental part of the course, before they start preparing for their respective course. There should be separate labs for all the courses like CCNA, CCIE, etc. Most of the institutes don’t provide dedicated CCNA, CCIE Labs to the students during training. We at NB have Asia’s Biggest Cisco Training Labs and provide separate labs for each level.

Labs of Network Bulls are available 24x7 with technical instructor accessible round the clock. Most of the institutes offer 24x7 Lab facility but don’t actually provide it. Students must check that the Labs are 24x7 available so that one can practice according to their own convenience. As Network Bulls Labs are huge and have plenty of equipments/devices, aspirants can practice without scarcity or unavailability of racks/devices.

Network Bulls has the Best Placement Records over the last 8 years in the Cisco Training industry. We are the only Institute in India providing Written Job Placement Guarantee to students enrolling for CCIE courses. We have consistently delivered Best Quality Training to our students, with ultra-modern Training Methodology and most updated Modern Lab equipments which has resulted in Highest Passing rates and Placement rates.

You can watch success stories of our students in:

Network Bulls has grown tremendously in a short span of 8 years and has become Asia’s Biggest and most reputed Cisco Training company ever. Following facts and figures might depict a clear picture of why Network Bulls is known as the Best Cisco Training Institute worldwide: 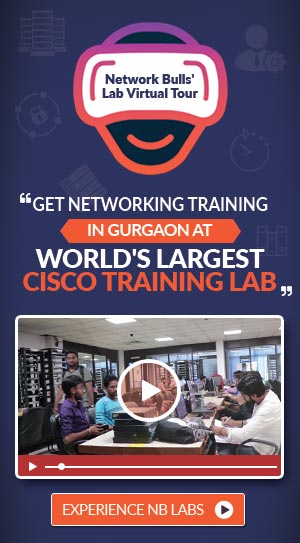 We have noticed that
you’re browsing from outside India